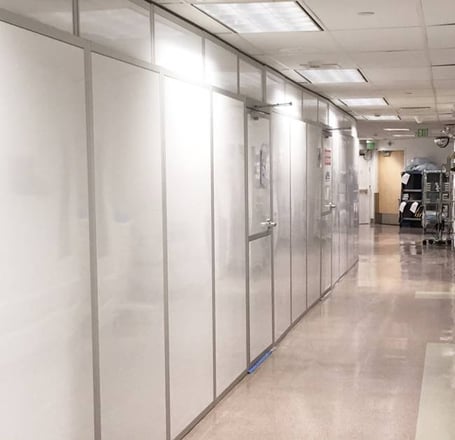 This article is used with permission from Intertek.

The ASTM E-84 (often referred to as just “E-84”) is the standard test method for assessing the surface burning characteristics of building products. The purpose of this test is to observe the flame spread along with a sample in order to determine the relative burning behavior of its material. Through the E-84 test, both the Flame Spread Index (FSI) and Smoke Developed Index (SDI) are reported for a given sample. FSI is the measurement for the speed at which flames progress across the interior surface of a building, while SDI measures the amount of smoke a sample emits as it burns.

When is the E84 test required?

The 2006 International Building Code (IBC) specifies that “interior wall and ceiling finishes shall be classified in accordance with ASTM E84.” Additionally, the National Fire Protection Agency (NFPA) 101® Life Safety Code® requires that “Interior wall or ceiling finish that is required elsewhere in this Code to be Class A, Class B, or Class C shall be classified based on test results from NFPA 255, ASTM E-84, or UL 723.”

An E84 test is conducted by placing a 24” wide x 24’ long sample into a Steiner Tunnel (see description of Steiner Tunnel below), wherein the test is administered through the use of two burners which provide 89kW of energy. During the test, the sample is mounted on the ceiling under a removable lid, and a forced draft is provided in order for the movement of air and products of combustion within the tunnel, and to the exhaust/scrubber system. The progress of the flame is then monitored through viewports on one side of the apparatus and recorded, with software computing the various data points to derive the FSI and SDI. Smoke developed is also measured through the optical density of a light obscuration meter. It should be noted that the ‘fuel contributed’ measurement is no longer in use.

What is a Steiner Tunnel?

Developed by Albert Steiner in the 1940s, the Steiner Tunnel is a steel box lined on its sides and floor with fire brick and featuring a removable lid. The tunnel contains a 12-in. high fire chamber with two burners at one end providing 89kW of energy. The Steiner Tunnel was adopted as an ASTM Standard in 1950 and given the designation of E-84. Equivalent standards are maintained by NFPA and UL as NFPA 255, UL 732, and with certain modifications as CAN/ ULC-S102. Under the Canadian standard, additional fire bricks are installed on the floor of the tunnel and the view glass is removed. UL 1256 also references a modified version of the Steiner Tunnel for use on certain roofing systems. The FSI and SDI indices are used to establish a scale for the rate at which flame spreads and smoke develops during an E84 test. For example, reinforced cement board calibration material has an FSI of 0 and an SDI of 0, whereas red oak calibration material has an FSI and SDI of 100.

Who does the E-84 fire and smoke testing?

Intertek currently operates four testing laboratories within North America certified to perform ASTM E84 Testing. In addition, our Coquitlam, British Columbia lab specializes in conducting CAN/ULC-S102 testing for the Canadian market. Their services also include testing to IBC, NRCC, and NFPA 101 standards, as well as testing required by overseas nations and specialty groups such as the California State Fire Marshal and USCG. Intertek’s Steiner Tunnels are some of the busiest in the commercial world.

What if a product fails? Passes?

ASTM E-84 is a comparative test, and as such, there is no real “pass” or “fail”. The test generates numbers expressed as Flame Spread Index (FSI) and Smoke Developed Index (SDI), and while there are no pass-fail criteria in the standard, certain codes and regulations define required FSI value and/or SDI value for applications and installations. If a sample’s values do not meet code directives, the product may be limited or prohibited. In such cases, it may be advisable to run additional tests (perhaps with modified materials) to legitimately improve the product’s FSI or SDI.

What are the differences in the US and Canadian versions of the test?

Are all containment systems rated for E-84?

No, E-84 certifies the system does not exceed the FSI and SDI values after 30 minutes of fire. A fire rated system can withstand one hour of fire resistance without exceeding the FSI SDI thresholds. The only temporary containment option that meets this threshold is drywall. There isn’t currently a modular containment solution that meets the fire-rated standards.

What if the healthcare facility or local Fire Marshall is advocating for a fire-rated solution?

Because STARC Systems temporary containment systems are used in highly sensitive environments, such as healthcare facilities, education centers, airports, corporate offices, laboratories, and more, we are constantly striving to make a safer and more superior product than any other on the market. As mentioned above, our RealWall™ and LiteBarrier™ containment systems, including the modular ceilings, have a Class A rating per ASTM E 84, meaning they have the lowest fire spread rate and minimal smoke production. Learn why leading contractors and building professionals prefer STARC by seeing our full list of advantages.